“The wand chooses the wizard. That much has always been clear to those of us who have studied wandlore…” —Garrick Ollivander

As every fan of the Harry Potter Universe knows, there is a list of items every first-year student needs to purchase before attending Hogwarts School of Witchcraft and Wizardry.  The most important those items is a wand, which leads students to Ollivander’s. A visit to Ollivander’s Wand Shop at the Wizarding World of Harry Potter at Universal Orlando is a must do—after all, this family’s only been making wands since 382 BC!

Because of the high demand for wands by wizards and the occasional muggle, there are two Ollivander’s locations at Universal Orlando: in Hogsmeade (Islands of Adventure) and Diagon Alley (Universal Studios Florida).  During our latest visit to the Wizarding World, we noticed that the wait to enter the Ollivander’s location in Hogsmeade (Islands of Adventure) was over an hour long, so we decided to check out the flagship location in Diagon Alley South in London (Universal Studios Florida). This is where Harry Potter’s wand chose him in Harry Potter and the Sorcerer’s Stone.

If your jaw did not drop when first crossing into the Wizarding World of Harry Potter, then get ready for it to when you visit this shop. This is not only a store, but an experience. No really, it is like a show. To get the complete wand shopping experience, I highly suggest participating in a wand choosing ceremony.  The best time to do this is early in the morning when you get to Universal. You can chose to skip this experience if you want to and just go directly into the shop, but I recommend doing the experience if there is not too long of a wait, or availability to reserve a visit later in the day.

PRO TIP: To keep wizards and muggles socially distanced, Ollivander’s takes reservations day of for your party’s wand ceremony mini show. Since the room where the ceremony takes place is so small, your party will have the space all to yourselves.  If you have a child in your group…the wand WILL PICK THEM! You will find Ollivander’s assistant at the back door of the shop holding a clipboard and quill near the “Fireworks” shop.  During our latest visit, we stopped by in the evening, and the shop had a time for us available in about an hour.  Ollivander’s assistant took down our names for our appointment.  Because 8-year-old girls have a jealous streak…. we asked the wizard what happens when only one child has a wand “pick” them?  He told us “don’t worry – Ollivander will take care of them both!”

Because of the nature of this quick experience (it only takes about 5 minutes), I will not go into detail—no spoilers here!  It is very personalized – Ollivander addressed each child by name, and they even ended up with wands who’s magical powers are fueled by a dragon’s heartstring – from the same dragon, meaning they’ll always be connected by magic and their bond of friendship. (Awwwwe.) Once the experience was finished, they opened the door to the shop where we could purchase the wand that selected us or browse the many others Ollivander has available for purchase.

This store is so intricate and immersive!  The interactive wands, which come with a map and allow you to perform spells in different shop windows around Hogsmeade and Diagon Alley are currently priced at $55 each.  The non-interactive variety are a bit less, but who wouldn’t want to try out some magic?!?!  The shop sells replica wands of SO many characters from the books.  The shop has so many characters’ wands:  Sirius Black, Professor Snape, Dumbledore, Bellatrix Lestrange, Ginny Weasley, and of course Harry, Ron, and Hermione. And there is so many others!  I especially loved Sirius Black’s wand – its solid black and covered with an ornate, carved design.  Not to mention, he’s one of my favorite characters from the books and films.

The girls insisted we purchase the interactive wands which chose them during the special ceremony, one made of “reed” and the other comprised of “birch” and both with the dragon heartstring core.  Of course, I must disclose these are made of painted resin, but to the girls, these were real magic wands!

When purchasing a wand, it comes in a nice, lined storage box and a beautiful map to help you locate “spell” locations around Diagon Alley and Hogsmeade.  For $1, you can purchase a unique shopping bag in which to store your purchase.

With wands and maps in hand, we were ready to cast all the spells!

(Most) Spell locations are marked by medallions set into the pavement, which can be located using your map. Each medallion indicates where you should stand to cast that particular spell, what direction to face, the wand movement required to cast the spell, and, finally, the “magic” words to shout while waving your wand.

Interactive wands cast their magic by a bit of modern muggle technology.  For a new wizard to achieve success in casting a spell, she must aim her wand in the right direction, as indicated by the medallion.

When using an interactive wand, saying the spell is name is not required for the magic effects because they’re based on motion only.  However, carefully enunciating wingardium levio-saaaah is a part of the immersive experience, so feel free to do your best Hermione impression. If you’re too cool for this, you can simply waive your wand and you’ll get the same magical results.  Items in the shop windows move, lighting changes and other surprises happen when you cast your “spells” toward these areas.

Please know some wand effects are trickier than others, and some will perform every time, even with an imperfect motion, while others require a good bit of precision for success.  Decendio and Acendio were difficult for us, but the results were so worth the practice!

Sometimes, a friendly, expert spell-caster, who is trained to assist new wizards perfect their spell-casting technique are stationed nearby. These team members are also enthusiastic and engage with aspiring wizards and witches of any age, encouraging them and praising their efforts. Take the time to appreciate their enthusiasm; they’re a great part of the interactive wand experience! One of our helpers even offered to take a photo of our group.

My main spell-casting tip is to keep and use your map. Many of the off-the-beaten-path spell stations are often empty because many guests do not know that they’re there – all the better for you!  This was difficult for me because the map is so beautifully created, I did not want it to get wrinkled or damaged from being handled too much!

When in Knockturn Alley, our favorite Slytherin hangout, each spell in this area is indicated by a small image that helps you find the location and effect of the spell.

Finally, try to find the “secret” mystery spell locations…. OR, if you plan your Universal Orlando visit with one of our fabulous FTM Travel agents, we “might” be able to give you a few pointers!  But I will tell you, if you see red dots from small infrared cameras in a shop window, there is probably a spell to be cast. These secret spells usually respond to a triangle motions and seem to be easier to cast than others.

There is SO MUCH to do and experience at Universal Orlando, but honestly, after our visit to Ollivander’s and our wand purchase, our kids could have spent the rest of our vacation casting spells in Hogsmeade and Diagon Alley!  We are already planning our next visit to get some more use outta those wands!  Expecto Patronum!!! 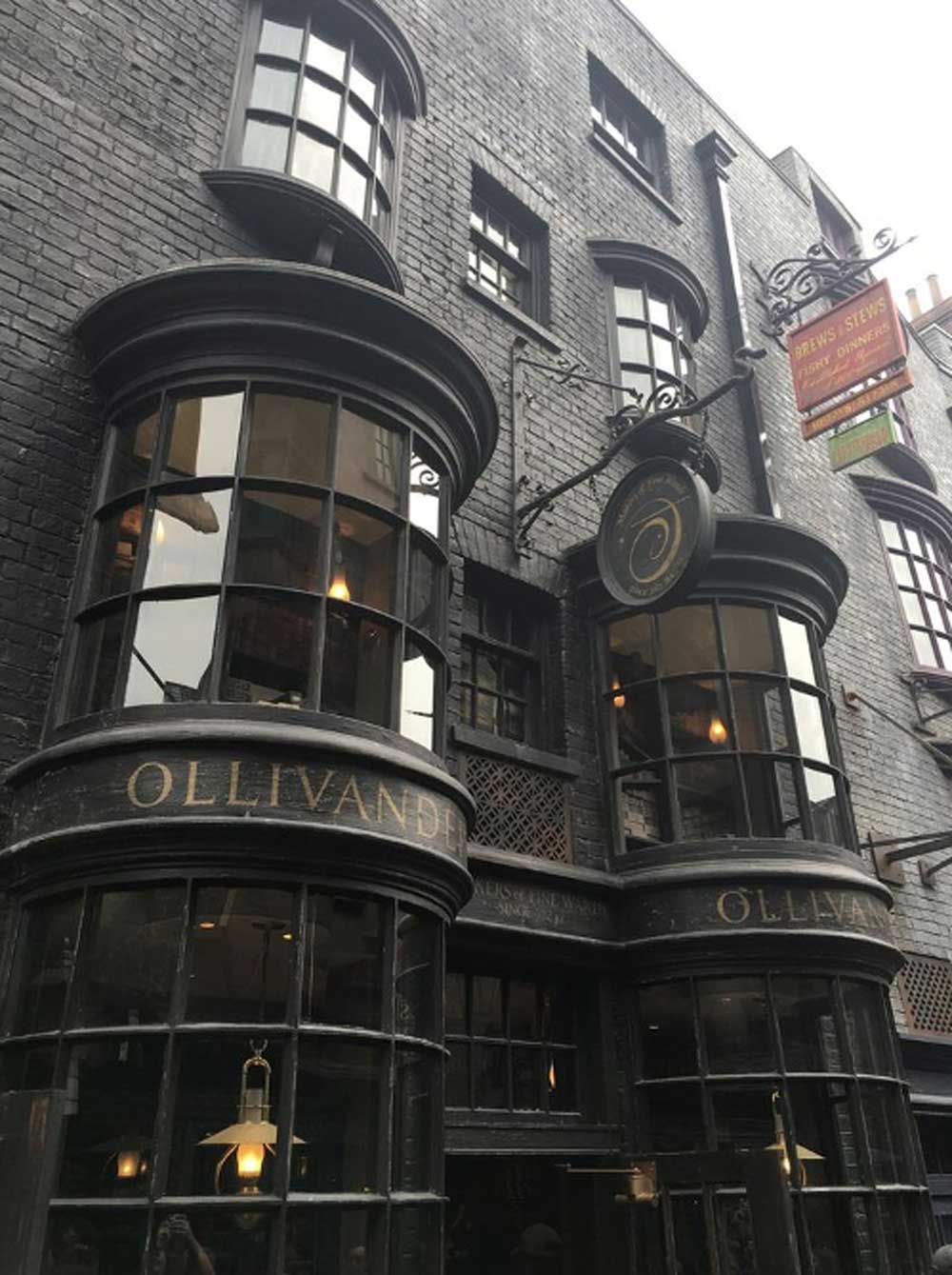